Toilets witness some of the most important life experiences.

Toilets witness some of the most important life experiences

Many births are first detected by a pregnancy test 7-9 months before.
Pregnancy tests work by checking your urine (pee) for a hormone called human chorionic gonadotropin (HCG) and can be bought over the counter or taken from a pee sample at the G.P surgery.
There are many stories in the media of women going to the lavatory and giving birth on the toilet or the floor of the bathroom.

Potty training is an important right of passage for most children. This may involve weeks or months or practise and training, sticker charts, pull up pants and more until the process has been perfected. Toilets can take a bit of a bashing during this period of childhood.

One-in-three office workers pop to the loo – even if they don’t need to go – to escape their colleagues and have a break from work. A poll of 2,000 office workers found that the average amount to time spend in the toilet each day was just under 14 minutes. Over the course of a year, excluding weekend and holiday days, that works out at around 56 hours a year, a total of seven working days out of the average working year. A total of 39 per cent of those polled said the office loo was the best place to ‘get some peace and quiet’, rather than popping outside in the open air. 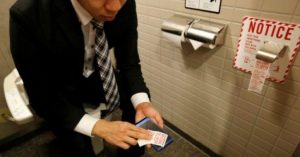 Many people also pass away on the toilet – here is a list of famous people who died on or around the bathroomt:

• George II Collapsed shortly after attending to his close stool, possibly died of an Aortic aneurysm @ Kensington Palace
• Catherine the Great – died of a stroke while ‘attending her Chamber business’
• Judy Garland – overdosed on Barbiturates while using the loo
• Charlie Chaplin Jr. was an actor in his own right, appearing in 13 films. Chaplin Jr. died in 1968, at age 42, of a pulmonary embolism on the floor of his grandmother’s bathroom
• Jim Morrison: Best known as lead singer of The Doors, Morrison’s death was caused by a heart attack in an apartment in Paris, France. While that’s the official police report, others allege Morrison died on the toilet of a nightclub after an apparent drug overdose. He was just 27 years old
• Elvis Presley also holds the dubious distinction of being the most famous person to die on the toilet. To be clear, Elvis wasn’t actually found on the toilet, he was found several feet from the toilet – possibly seeking help after he suffered a heart attack

And not forgetting the most recent televised death on a toilet – The character Tywin Lannister (Game of Thrones) is killed by his son, Tyrion Lannister, while using the toilet – not the Throne he was hoping for! 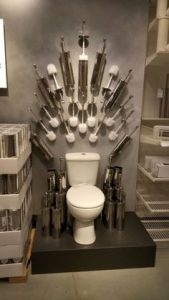 If you need facilities for your building project or event – call us 01278 773770 / www.griffintoilethire.co.uk

Website by Teapot Creative
We use cookies to ensure that we give you the best experience on our website. If you continue to use this site we will assume that you are happy with it.OkRead more